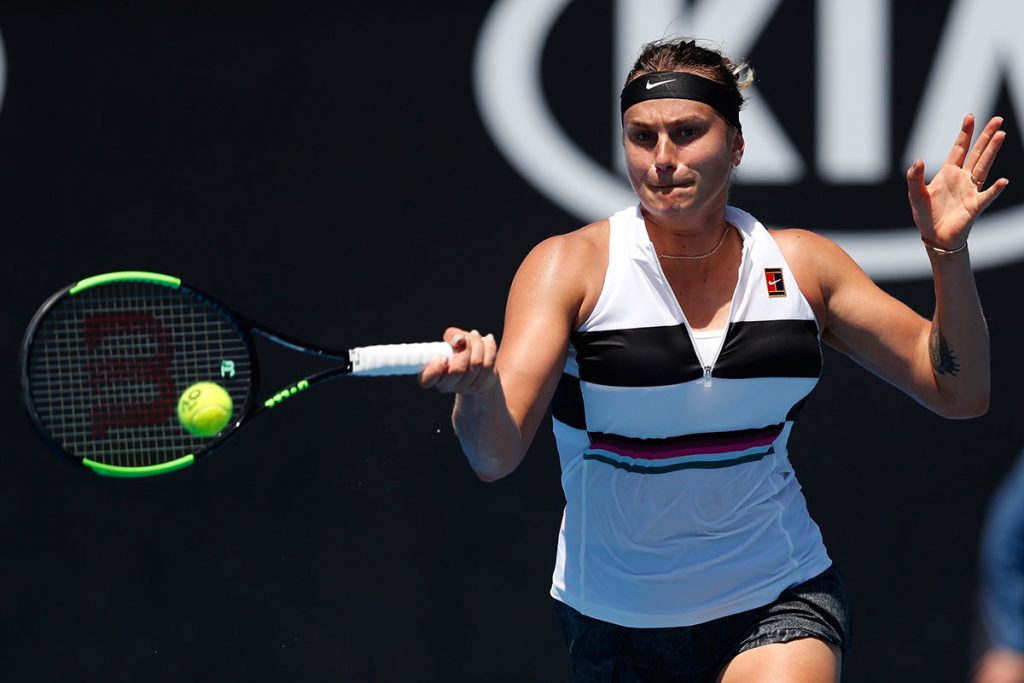 Aryna Sabalenka is looking to put herself on the map in a big way at the Australian Open. (Getty Images)

MELBOURNE, Australia (AP) — The Latest on Monday at the Australian Open: (all times local):

Berdych picked up a surprisingly easy victory over the 13th-seeded Edmund on Monday, beating him 6-3, 6-0, 7-5.

The biggest difference? Edmund made 36 unforced errors, 22 more than Berdych. Edmund also managed to earn only one break point and failed to convert it, while Berdych broke him five times.

Berdych was the 2010 runner-up at Wimbledon and he twice has been a semifinalist at the Australian Open.

Edmund’s top result at a major came a year ago in Melbourne.

John Isner hit more aces than his opponent, 47-40. He delivered more total winners and finished with more overall points, too. What Isner failed to do for the first time in his career was beat an American foe at a Grand Slam tournament, and now the highest-ranked man from the U.S. is gone from the Australian Open.

Isner was seeded No. 9, was a semifinalist at Wimbledon last year and had been 9-0 in all-U.S. contests at the Slams.

Isner went up a break in the fourth set and served to force a fifth while ahead 5-4. But he got broken there, missing one backhand followed by a trio of forehands. Opelka took the eventual — inevitable? — tiebreaker with the help with of three aces, including one at 227 kph (141 mph) to close out the match.

Katie Boulter started celebrating a bit too soon during her first-round win over Ekaterina Makarova at Melbourne Park. Blame the new tiebreaker being used for the first time this year at the tournament.

Boulter beat Ekaterina Makarova 6-0, 4-6, 7-6 (6), including 10-6 in the tiebreaker. But the British player started celebrating and went to the net when she reached 7-4 in the tiebreaker , forgetting the third-set decider wasn’t using a conventional count.

In women’s singles play and men’s and women’s doubles and mixed doubles, the deciding set of three sets will be played with a 10-point tiebreaker at 6-6.

Wimbledon announced in October it will have a standard first-to-seven-points tiebreaker when the deciding set reaches 12-12.

The U.S. Open was the first Grand Slam tournament to introduce final-set tiebreakers, with a first-to-seven-points game at 6-6.

The French Open is the only remaining Grand Sam still decided by a long deciding set by advantage.

Second-seeded Angelique Kerber is through to the second round at Melbourne Park with a 6-2, 6-2 win over Polona Hercog.

Kerber became the first German woman since Steffi Graf at the 1999 French Open to win a major when she beat Serena Williams in the final here three years ago.

Former French Open champion Jelena Ostapenko has been beaten 6-1, 3-6, 6-2 by Maria Sakkari in the first round at Melbourne Park.

The 22nd-seeded Ostapenko, who also advanced to the semifinals at Wimbledon last year, had beaten Sakkari in three sets in their only previous meeting at Charleston in 2017.

Sakkari had an early service break in the deciding set, then broke again to take a 4-1 lead at Melbourne Arena, the tournament’s third show court. The Greek player used two aces to clinch the next game and take a 5-1 lead, then served out to love two games later to win the match.

Stephens lost in the first round of the Australian Open in 2015, 2016 and 2018. She missed the 2017 tournament here after undergoing foot surgery and went on to win the U.S. Open later the same year.

Stephens and Townsend were among 15 American women in the singles main draw this year, including those who qualified.

Townsend has lost all three first-round matches she has played in Melbourne.

Rafael Nadal wasn’t about to let another Australian wild-card entry beat him at a Grand Slam tournament.

Nadal’s only previous defeats to wildcard entrants at majors were against American James Blake in the third round of the 2005 U.S. Open and Australian Nick Kyrgios in the round of 16 at Wimbledon in 2014.

Nadal, wearing a sleeveless top, did an extended left-arm celebratory pump after breaking Duckworth’s serve after two cross-court stunners to lead 4-2 in the third set.

His only stumble as he served for the match and was broken by Duckworth, who got back to 5-4. But Nadal returned the favor, breaking the Australian in the final game of the match.

Nadal has only lost twice in the first round at Grand Slams — to Steve Darcis at 2013 Wimbledon, and to Fernando Verdasco at Melbourne Park in 2016.

Anderson has lost in the first round here six times, including to Kyle Edmund last year. It was the South African’s first win in Melbourne since 2015.

He warmed up for the Australian Open by winning his sixth ATP tour title at Pune, India.

Mannarino became upset when Anderson took a lengthy bathroom break after the third set, complaining to the umpire. The Frenchman’s mood wasn’t improved when he lost his service game to open the fourth set.

Mannarino recorded his best performance at Melbourne Park by advancing to the third round last year. He went into Monday’s match having lost in the first round at Doha and at last week’s Sydney International.

Katie Boulter has the distinction of winning the first 10-point tiebreaker under the Australian Open’s new system for determining level deciding sets.

Boulter beat Ekaterina Makarova 6-0, 4-6, 7-6 (6), including 10-6 in the tiebreaker in which the first player to reach 10 with an advantage of two points clinches the match.

In women’s singles play and men’s and women’s doubles and mixed doubles, the deciding set of three sets will be played with a 10-point tiebreaker at 6-6.

Wimbledon announced in October it will have a standard first-to-seven-points tiebreaker when the deciding set reaches 12-12.

The U.S. Open was the first Grand Slam tournament to introduce final-set tiebreakers, with a first-to-seven-points game at 6-6.

The French Open is the only remaining Grand Sam still decided by a long deciding set by advantage.

Maria Sharapova got out of the Melbourne heat as quickly as she could, needing just 63 minutes to beat British qualifier Harriet Dart 6-0, 6-0 in the first match on Rod Laver Arena at this year’s Australian Open.

Sharapova, who wore an ice collar during breaks to help alleviate the 30 degree Celsius (86 Fahrenheit) temperature, was making her 15th appearance at the season-opening major.

The only break point Sharapova faced was when she double-faulted in the fifth game of the second set.

Dart, who described Sharapova as her idol before the match, lost in the first round at Wimbledon last year after being given a wild card in her only previous Grand Slam singles appearance.

The 22-year-old Dart had a game point on her serve in the eighth game of the match, but Sharapova rallied to break the British player and continue the rout.

Maria Sharapova will be the first of five former champions playing on Rod Laver Arena on day one of the Australian Open.

The night session on center court was set to begin with a ceremony honoring the man himself, Rod Laver, on the anniversary of his second Grand Slam of singles majors in 1969.

The temperature was 26 degrees Celsius (79 Fahrenheit) as players warmed up for the opening matches, and was expected to rise to 34C (93F) later in the day.