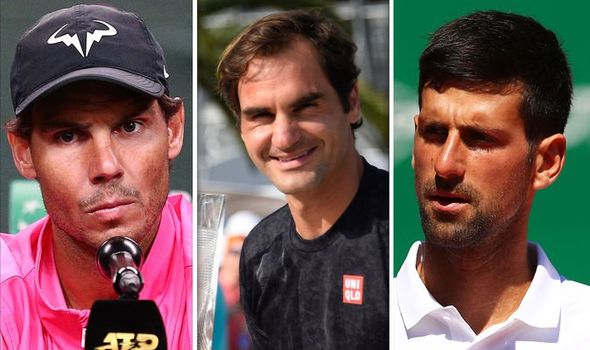 RAFAEL NADAL insists it is not his “dream” to play Roger Federer and Novak Djokovic in the finals of Grand Slams again – but rather just to keep playing tennis.

The 32-year-old makes his return from yet another injury this week at the Monte Carlo Masters.

Defending 4,680 points in the ATP rankings from last year’s clay-court season, Nadal will hope to return to his favoured surface on top form.

The Spaniard has been out since withdrawing from an Indian Wells Masters semi-final contest against Roger Federer due to a flare-up of a long-standing knee problem.

Nadal recently admitted that he hopes to have “a couple more years” left on tour but given his poor injury history, acknowledged his retirement is not that far off.

And speaking from the Masters 1000 event in Monte Carlo, Nadal insists he is not dreaming of coming up against either of his two long-time rivals in the finals of major events but simply enjoying the final years of his career.

He explained: “I don’t dream much. I just try to go day-by-day.

“My dream is just to keep playing tennis and enjoying the competition.

“My dream now is to try to be competitive from Wednesday and try to play a good Monte Carlo.”

Nadal is an 11-time champion in the tournament on the Mediterranean coast and has won the event in all of the last three years.

No player has ever won the same event 12 times on tour.

The 17-time Grand Slam champion added: “It’s the start of the important clay season for me.

“This tournament is important for me, and I hope to be competitive from the beginning.”

He owns a 2-0 record against his countryman with both of their meetings having come on clay.

Their last head-to-head was at the French Open in 2017, with Nadal winning in straight sets.