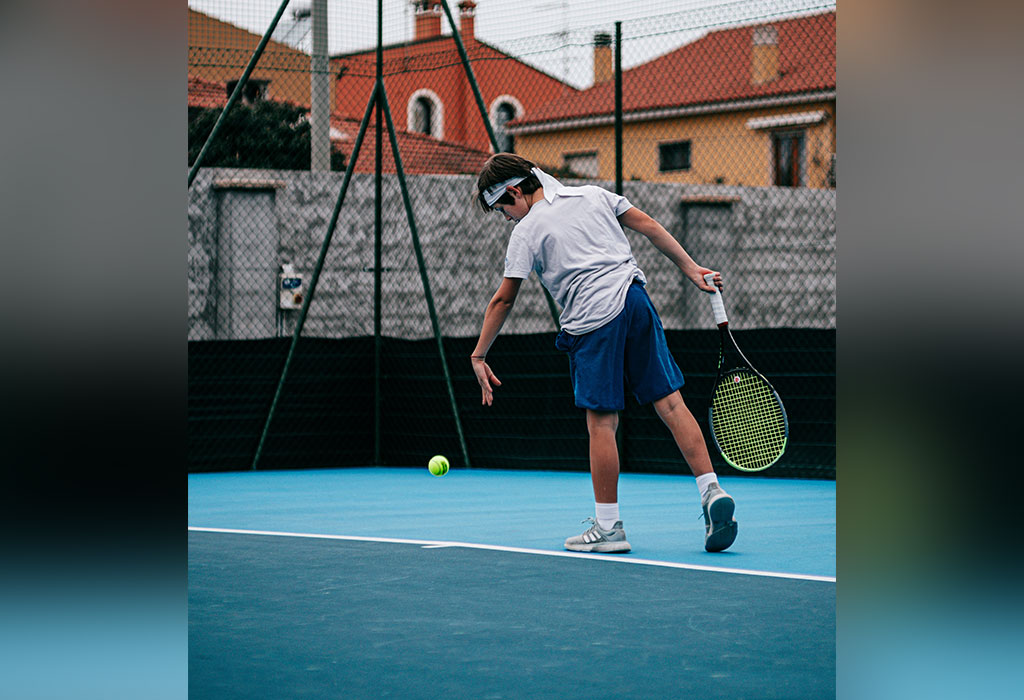 1. Try not to back up when hitting returns. Backing up only increases the distance that you have to cover in order to return. Although the server’s angle can be the same, the further back you go, the greater the side of the triangle that you have to cover. If anything, try to move in so that you can be closer to both sides of the triangle that make up the potential trajectories of the serve.

2. Being closer to the court equals a quicker reaction time. This is really not the time to be a hero when it comes to hitting returns. Cut back on your back-swing and try to “smother” the serves like a soccer goalie. The object is to get as many returns in play as possible. You may prefer to keep a relatively tight neutral grip and block the return off both sides. If you’re strong enough, you should be able to redirect the return deep without much swing and position yourself in the middle of the court right away.

3. Keep mental tabs on the server’s peculiarities. Sometimes it is easier to “read” a taller person than a short person. A taller person tends to telegraph his movements a lot sooner so once you notice something out of the ordinary (be it toss, shoulder movement, hip turning, etc.) make a mental note of it and see if it pops up again next time he aims for the same target. Then, the third time, you can start anticipating.

4. Bait them into serving where you want. For the most part, big-serving juniors have not mastered the slice serve (out wide on the deuce or down the T on the ad-side). So it may be worthwhile to squeeze the backhand side and bait him to go to your forehand. Maybe you can move towards the backhand a couple of inches but maintain (or change to) a forehand grip just in case he chooses to go to the forehand. He will then be forced to go for a riskier serve towards your backhand or an untested serve toward the backhand.

5. Win the first two points of your service game. You do not want to go down 0-30 against someone who is “nothing but a serve”. If they go up, they will start taking chances on your returns knowing that the chance of being broken themselves is quite small. Often times, they will be relaxed and get lucky with some low-percentage slaps. Don’t give them this opportunity.

6. Seek to wrong-foot them in rallies. Once you get the point started, big/tall players have an easier time running for a ball that’s in front of them than changing directions. But also be aware of taller players who are lazy and prefer not to run at all. Your job in this case it to MAKE those opponents run.

7. Keep the ball low. There’s no shame in slicing the ball low or hitting flatter shots than usual (but not completely flat). Make the tall player get down for every ball and then move. Get down; move; get down; move. Not everyone’s built the same way, so certain plays may be more taxing on some players than others.

8. Take the net away from them. Again, given that taller players don’t always move as well side-to-side and prefer to be the aggressors, it may be worthwhile to “take the net away” from them. Chip-and-charge or rush in on some plays and force them to move quickly and change direction for the passing shots. In other words, force THEM to be the rabbits.

9. Keep them in the point. Yank them side to side and push them back and diagonally forward. Try to wear them down with long points and capitalize on the drop in serving speed and loss of focus. Remember, they expect to win quickly and on short points; so the longer they’re out there, the greater the chance that they’ll be rattled and start making unforced errors themselves.

10. Do not get intimidated. Show your opponent that you are up for the challenge and you will not be a walk-over. The reality is that, for the most part, big-bombers/tall players are somewhat one-dimensional (things change, of course, on the pro tour). At first blush, taking them down may seem like a daunting task, but if you’re willing to rock the stone column long enough, eventually it will come down on its own.

Photo by nicontents . on Unsplash