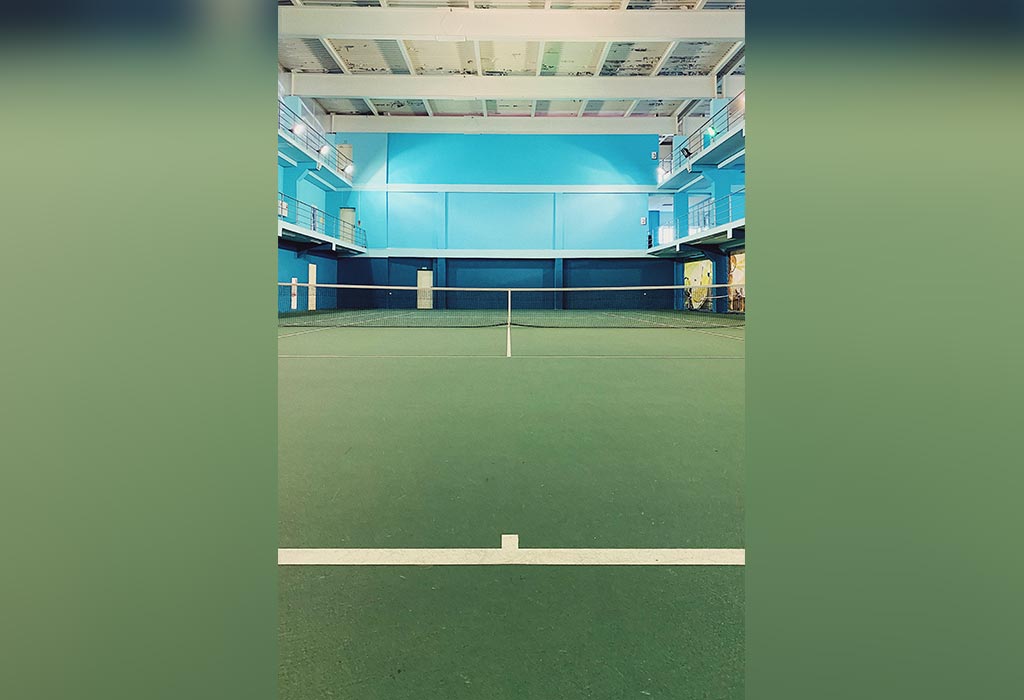 Squash tennis is an American variant of squash, but played with a ball and racquets that are closer to the equipment used for lawn tennis, and with somewhat different rules. For younger players the game offers the complexity of squash and the speed of racquetball. It also has exercise and recreational potential for older players.

North American squash court
A North American squash court is 18.5 by 32 feet (5.6 by 9.8 m). Originally designed for the related game of squash racquets, by the early 1930s the National Squash Tennis Association (NSTA) approved play on this kind of court. The dimensions are quite similar to the official squash tennis court. The only required modifications are the addition of a 4.5-foot (1.4 m) back wall line (in N. American squash the back wall line is 6.5 feet or 2.0 metres from the floor) and the center court line on the floor. Temporary lines can easily be added with blue painter’s tape. The problem today is that as the North American version of squash becomes less popular, new courts are not being built, and many old ones are being converted to other uses.

Squash tennis court
In 1910 the NSTA adopted a standard court size of 17 by 32.5 feet (5.2 by 9.9 m). Although many of these were built in the New York area, after play was authorized on a North American squash court they began to disappear. It did not make economic sense to maintain a specialty court when a more versatile one was acceptable.

International squash court
An International squash court is 21 by 32 feet (6.4 by 9.8 m). The additional lines will need to be added. The extra width of the court makes the various multi-walled shots more difficult or impossible, so experienced players prefer to use a North American court. However, a 21-foot (6.4 m) court is often the only one generally available, particularly outside North America.

Non-standard courts
Originally the game was played on a racquets court, then on fives courts. Before 1911 there were no standards for court size, and ones constructed specifically for squash tennis varied from each other somewhat. They were constructed at private estates and clubs. At least one of these courts survives today in a playable condition. The court at Plum Orchard was fully restored in 2008 with the tins in place and working electric lights. It was added to George Lauder Carnegie’s “Plum Orchard” estate on Cumberland Island, Georgia, in the winter of 1903/04, and is now owned by the National Park Service. An exhibit on squash tennis history has recently been installed in the mansion, which is occasionally open for public tours.

Photo by Sergei Wing on Unsplash