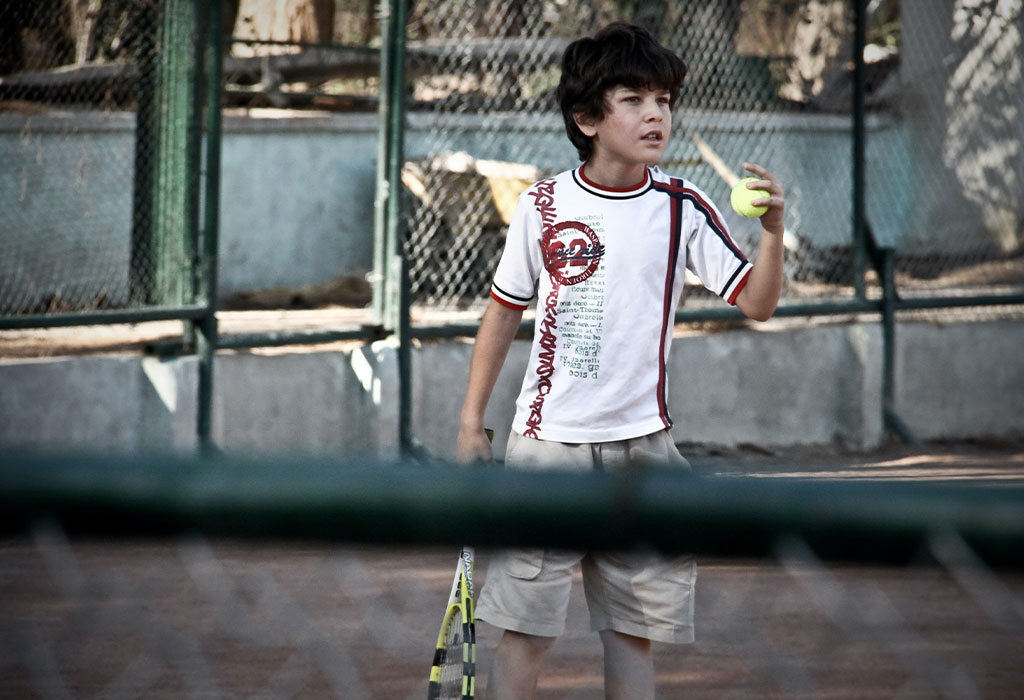 Proper Stance
There is not one right way to stand in tennis as mastering varied stances is required to be a successful player, however, instructors may debate about which stance is best to teach first to children who are beginners. The four common stances used in tennis are closed, squared, semi-open and open as pictured below. The modern approach to teaching tennis advocates a semi-open or open stance, but if your child’s instructor is older and learned by the traditional methods, they may choose to teach them a closed or squared stance to start. A main advantage for young children learning an open stance first is that their head is not turned allowing them to see the ball better. Teaching a more closed stance first can be effective in teaching beginners about rotating the shoulder and upper body.

Roger Federer is able to hit a great shot in any stance (even when off-balance or out of position). From left to right, you can see him setting up for a shot in a squared stance, a semi-open stance and an open stance. After many tennis lessons, your child will eventually learn how and when to use each stance in match play.

Path of Swing
One of the common mistakes you’ll see in children who have not had proper tennis instruction is incorrect path of swing on their groundstrokes. You may see them hitting down on the ball or not following through correctly. A private tennis instructor will teach beginner children the basics: hit low to high and finish the stroke across the shoulder. You may have seen some advanced junior players end their strokes closer to the hip or above their head, another aspect of modern tennis, but beginners should be learning to wrap their arm around their neck to elongate the stroke as shown in the photos below.

Varied Grips
Similar to stance in tennis, there is no one right way to hold a tennis racket. Pictured below are the six most common grips, though it’s doubtful your child will be learning a one-handed backhand (figure 5) as the stroke is becoming obsolete in many teaching circles. The preferred forehand grip among most players today is the semi-western (figure 3), though the traditional forehand grip is the eastern (figure 2). When I was a kid, I started out using an eastern grip and then naturally moved to a semi-western as I learned to hit topspin on the ball. Again, depending if your child’s instructor adheres to modern or conventional teaching methods will determine which grip they will emphasize. On a two-handed backhand (figure 6), the dominant hand should mirror the forehand grip, while the non-dominate hand rests on top. It’s also important your child learns the continental grip (figure 1) for hitting volleys and serves. It’s probably the most challenging grip to teach children because it is not naturally comfortable to hit that way, but it is better to learn it now than have to unlearn an incorrect volley or serve grip later.

How to Serve
Learning how to hit a great serve takes years. In the first tennis lessons the instructor may spend some time going over continental grip, proper motion and toss before having your child hit a single ball.The instructor will likely teach your child the fundamentals of one of two service motions: Pete Sampras’ motion or Andy Roddick’s motion. The serves of these former pros are talked about a great deal in coaching circles. The service motions are very different from each other, yet are both incredibly powerful. If you watch the below videos of each serve, you’ll notice the main difference is that Sampras sweeps his racket head down in a circular motion before drawing the racket behind his back, while Roddick takes his racket head straight up and back. I was taught both ways and found my preference was Sampras’ motion, although I know several people who have great serves that mimic Roddick’s motion. Roddick’s motion may be easier for beginners to learn because it requires less steps, but young students can eventually master either motion.