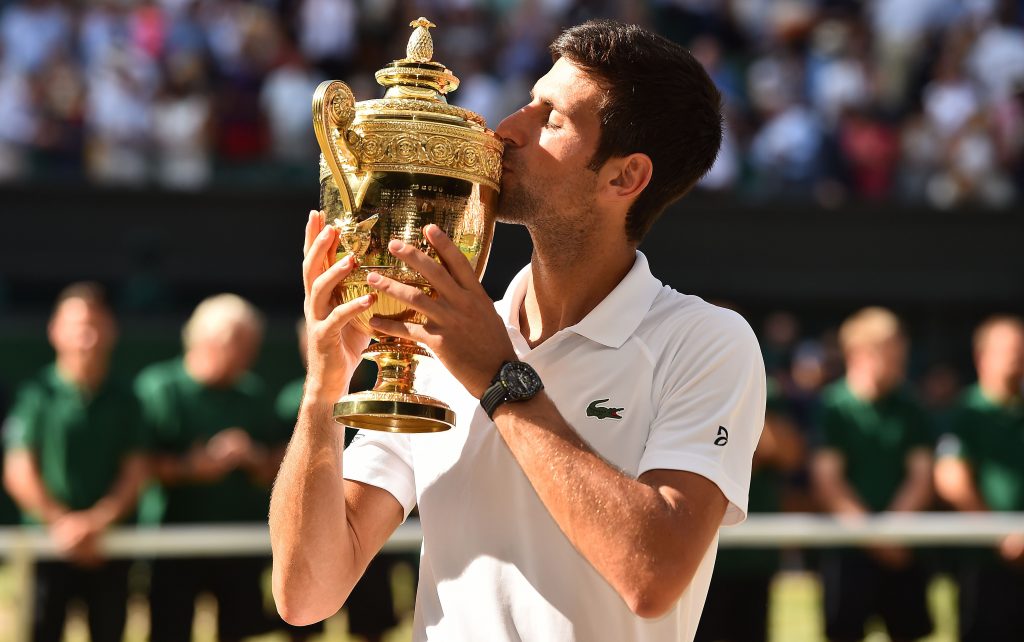 The Biggest Questions of 2019: Who will be the most successful American man?

One of the most talked-about stories of the 2018 tennis season happened in 2008. Ten years after Rafael Nadal edged Roger Federer in the 2008 Wimbledon final, that epic encounter in London’s dying light inspired a cottage industry in anniversary remembrances. There were oral histories, full-match replays, photo essays, historical assessments and the documentary Strokes of Genius. In the film, Nadal and Federer offered their memories of that final, which at 4:48 is the longest in Wimbledon history.

Normally when we celebrate a sports anniversary, we’re celebrating a moment from another era, something that reminds us of beloved athletes long retired, or of playing styles, like serve and volley, long discarded. That wasn’t the case with this anniversary. The only partially-forgotten—and perhaps happily forgotten—fact that these remembrances forced us to recall was that Federer once wore a cardigan, and Nadal once wore a sleeveless muscle shirt, on Centre Court.

Otherwise, little in men’s tennis has changed since 2008. When Strokes of Genius was released last July, Nadal and Federer were ranked No. 1 and No. 2, and they had combined to win the last six Grand Slam titles. Instead of making fans wistful for a bygone era, the movie made them hope that Roger and Rafa could reprise their classic final a decade later.

“In 2008, I don’t think I imagined I’d be writing about Federer and Nadal the same way in 10 years,” says Jon Wertheim, author of Strokes of Genius, the book that inspired the film. “I think most of us thought the ’08 final would be a kind of culmination of their rivalry. Federer had already won Wimbledon five times, and he and Rafa had been No. 1 and No. 2 for nearly three years. That’s about as long as most guys stayed dominant in the past.”

Bjorn Borg and John McEnroe played their last match in 1981, when the Swede was 25 and the American was 22. Pete Sampras and Andre Agassi had their last match in 2002, when Sampras was 31 and Agassi was 32. In 2018, Federer turned 37 and Nadal turned 32, but each won a Grand Slam title and finished in the Top 3; neither, in other words, looked ready to hang it up. The 2008 Wimbledon final once looked like the summit of their careers; in retrospect, it looks like one peak in a journey through a much higher and longer mountain range than anyone believed existed.

Yet Nadal and Federer aren’t unique. They’re just two members of a generation that, whether or not it turns out to be the greatest in the sport’s history, is surely the oldest of the Open era. In 2018, seven of the ATP’s year-end Top 10 were in their 30s, and there are currently no men under 30 who have won a Grand Slam singles title. Even the tour’s breakthrough players are veterans: the two men who made their debuts at this year’s ATP Finals were 33-year-old John Isner and 32-year-old Kevin Anderson.

When you look at the winners of the four Grand Slams in 2018—Federer, Nadal, and twice Novak Djokovic—it seems as if the era celebrated in Strokes of Genius is about to start all over again. Djokovic, who made a meteoric rise back to No. 1 over the second half of 2018 at age 31, appears set to dominate the game for the foreseeable future.

“It used to be that hitting 30 was the sign that a player’s career was winding down,” Wertheim says. “But Federer and Nadal have changed other players’ expectations for how long they can keep playing their best tennis.”

All of which leaves us with two questions as we head into 2019: Is aging good for the men’s game? And where are tomorrow’s champions?

“Aging” is normally a dirty word in sports, and that has always been true for tennis. In a sport where quickness and reflexes are paramount, any slip is magnified and exploited. Many iconic champions blazed their way to the top as audacious adolescents: Borg, McEnroe, Mats Wilander, Boris Becker, Sampras, Djokovic and Nadal all won Grand Slam titles before turning 21.

But since Nadal won Roland Garros in 2005 at 19, that teen pipeline has largely dried up, and the average age of major champions has risen. For some, this aging process can seem like a sign of the sport’s withering: if we’re not producing prodigies anymore, there must be something wrong.

The natural order of sports, and life, says that a new generation will arrive to topple the old. Yet that arrival keeps being postponed. Federer, Nadal and Djokovic have won 51 of the 64 majors held since 2003. In the process, they’ve vanquished the group of players who were supposed to be their successors. Now, a new generation—the ATP’s so-called “Next Gen”—is showing signs of stagnation. Its presumptive leaders, Nick Kyrgios and Alexander Zverev, have yet to make it past the quarterfinals at a major.

This doesn’t sit well with some players.

“It’s quite bad for tennis,” former No. 1 Marat Safin told the Spanish paper Marca. “In my time, if at 17 you didn’t win an ATP tournament, you were killed. Now if you win a tournament when you’re 25, you’re a member of the Next Gen. Nadal and Federer are still at the top because the young people are very bad.”

Federer, who qualified as a “late-bloomer” in his day—he didn’t win a major until he was nearly 22—is more forgiving of the Next Gen’s frustrations.

“You feel an immense pressure, just the constant pounding of knocking on the door from everybody saying, ‘When are you going to make the breakthrough?’” Federer said last fall. “Not everybody is Michael Chang or Boris Becker or Lleyton Hewitt, who just break through. It’s just not so simple. Some need to work harder. Some need to work longer.”

What explains the longevity of the Big Three, and the deficiency of virtually everyone since? It starts at the top, with the talents that the best players in each generation bring—and, more importantly, with the standards they set. Federer may be the most gifted player ever, and his run from 2004 to 2007, when he won 11 of 16 majors, was as dominant as any in the Open era. Nadal is the game’s most passionate competitor, but to match Federer’s superior talent, he was forced to dig even deeper and, as he would say, “suffer” even more. The same went for Djokovic. The Serb is among the most technically and athletically proficient players ever, but it was his quest to catch Nadal and Federer that motivated him to maximize his abilities. Together, they have pushed each other to heights and achievements—Federer’s 20 Slams, Nadal’s 11 French Opens, Djokovic’s four consecutive majors and sweep of the Masters 1000s—that were once unimaginable.

So far the Next Gen has produced a deep and varied bench. Zverev, Kyrgios, Dominic Thiem, Stefanos Tsitsipas, Karen Khachanov, Borna Coric, Hyeon Chung, Alex de Minaur, Denis Shapovalov, Frances Tiafoe: each season a new crop of young guns comes to our attention. But the player who many regarded as their star attraction, Kyrgios, hasn’t led the way up the rankings or set a standard of excellence—the easily agitated Aussie finished 2018 at No. 35.

While Zverev and Thiem have established themselves in the Top 10, each has his weaknesses: Thiem is primarily a clay-courter, and Zverev, despite his wins over Federer and Djokovic at the 2018 ATP Finals, has yet to prove he can raise his game at the Slams. Neither, in short, has done what Federer did in 2004: show the tennis world that a new generation is ready to take command, and to do things that no one has done before.

Still, the Big Three will have to leave the stage someday. Maybe the fact that they continue to entertain us in their 30s is something to celebrate rather than lament. Maybe their longevity is a sign of tennis’ evolution, rather than its withering—today’s players are more professional and committed than ever, and the game has grown too complex and involved, mentally and physically, to master at a young age. Maybe it’s time to recognize the benefits of an “aging” group of elite athletes.

“An aging field—and these guys are hardly old—gives fans longer to bond with the players,” Wertheim says. “These are athletes, Federer, Nadal and Djokovic, with one-of-a-kind gifts; why wouldn’t we want to see them use them for as long as possible? No one is going to be able to replace them.”

The aging of the men’s game has also given fans a chance to appreciate late-blooming players we may never have discovered when tennis lifespans were shorter. We’ve seen Stan Wawrinka break free from the grip of the Big Three and win three major titles. We’ve seen Anderson find his inner warrior on court, and heard his thoughtful words off it. We’ve seen Isner make one of the most successful transitions from college tennis to the pro tour. We’ve ridden along with Juan Martin del Potro on the emotional roller coaster that has been his career. We’ve rooted for, and agonized with, these men for so long, they feel like family.

As Nadal said last summer, “There are two options to explain the fact that three players are dominating the circuit for so many years. Either we have been special, or the emerging players have not been special enough. I cannot say which is correct.”

For now, we know one thing is correct: This generation, the Big Three generation, has been something special. Let’s enjoy their genius for as long as we can.