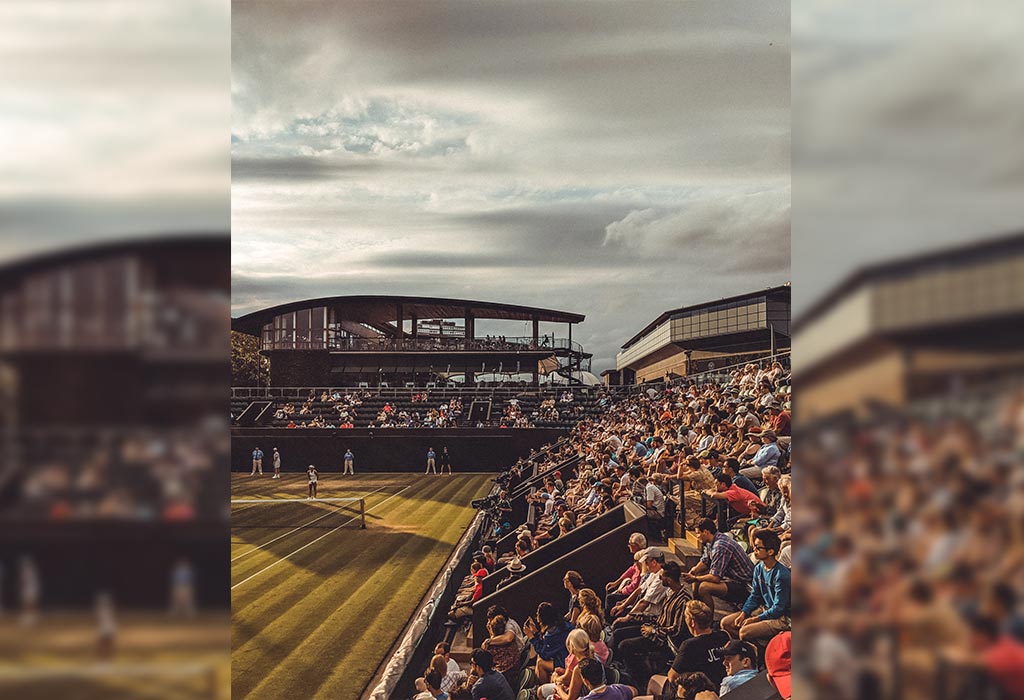 In 1876, lawn tennis, a game devised by Major Walter Clopton Wingfield a year or so earlier as an outdoor version of real tennis and originally given the name Sphairistikè, was added to the activities of the club. In spring 1877, the club was renamed “The All England Croquet and Lawn Tennis Club” and signalled its change of name by instituting the first Lawn Tennis Championship. A new code of laws, replacing the code administered by the Marylebone Cricket Club, was drawn up for the event. Today’s rules are similar except for details such as the height of the net and posts and the distance of the service line from the net.

The inaugural 1877 Wimbledon Championship started on 9 July 1877 and the Gentlemen’s Singles was the only event held. 22 men paid a guinea to enter the tournament, which was to be held over five days. The rain delayed it four more days and thus, on 19 July 1877, the final was played. Spencer Gore, an old Harrovian rackets player, defeated William Marshall 6–1, 6-2 and 6–4 in 48 minutes. Gore was presented with the silver challenge cup, valued at 25 guineas and donated by the sports magazine The Field, as well as a prize money of 12 guineas. About 200 spectators paid one shilling each to watch the final.

The lawns at the ground were arranged so that the principal court was in the middle with the others arranged around it, hence the title “Centre Court”. The name was retained when the Club moved in 1922 to the present site in Church Road, although no longer a true description of its location.However, in 1980 four new courts were brought into commission on the north side of the ground, which meant the Centre Court was once more correctly described. The opening of the new No. 1 Court in 1997 emphasised the description.

By 1882, activity at the club was almost exclusively confined to lawn tennis and that year the word “croquet” was dropped from the title. However, for sentimental reasons it was restored in 1899.

In 1884, the club added the Ladies’ Singles competition and the Gentlemen’s Doubles was transferred from the Oxford University Lawn Tennis Club. Ladies’ Doubles and Mixed Doubles events were added in 1913. Until 1922, the reigning champion had to play only in the final, against whomever had won through to challenge him/her. As with the other three Major or Grand Slam events, Wimbledon was contested by top-ranked amateur players; professional players were prohibited from participating. This changed with the advent of the open era in 1968. No British man won the singles event at Wimbledon between Fred Perry in 1936 and Andy Murray in 2013, while no British woman has won since Virginia Wade in 1977, although Annabel Croft and Laura Robson won the Girls’ Championship in 1984 and 2008 respectively. The Championship was first televised in 1937.

During World War II, the tournament was not held in the period 1940–1945. On 11 October 1940 one bomb hit a corner of the competitors’ stand of the Centre Court. The championships did go ahead in 1946 even though the damage meant that 1,200 seats were lost. The organisers were unable to repair the damaged section until 1947 and the Centre Court was fully restored and renovated for the 1949 edition.

In 1946 and 1947 Wimbledon was held before the French Championships and was thus the second Grand Slam tennis event of the year.

Wimbledon is widely considered the world’s premier tennis tournament and the priority of the club is to maintain its leadership. To that end a long-term plan was unveiled in 1993, intended to improve the quality of the event for spectators, players, officials and neighbours.Stage one (1994–1997) of the plan was completed for the 1997 championships and involved building the new No. 1 Court in Aorangi Park, a broadcast centre, two extra grass courts and a tunnel under the hill linking Church Road and Somerset Road. Stage two (1997–2009) involved the removal of the old No. 1 Court complex to make way for the new Millennium Building, providing extensive facilities for players, press, officials and members, and the extension of the West Stand of the Centre Court with 728 extra seats. Stage three (2000–2011) has been completed with the construction of an entrance building, club staff housing, museum, bank and ticket office.

A new retractable roof was built in time for the 2009 championships, marking the first time that rain did not stop play for a lengthy time on Centre Court. The Club tested the new roof at an event called A Centre Court Celebration on Sunday, 17 May 2009, which featured exhibition matches involving Andre Agassi, Steffi Graf, Kim Clijsters and Tim Henman. The first Championship match to take place under the roof was the completion of the fourth round women’s singles match between Dinara Safina and Amélie Mauresmo. The first match to be played in its entirety under the new roof took place between Andy Murray and Stanislas Wawrinka on 29 June 2009. Murray was also involved in the match completed latest in the day at Wimbledon, which ended at 11:02 pm in a victory over Marcos Baghdatis at Centre Court in the third round of the 2012 Championships. The 2012 Men’s Singles Final on 8 July 2012, between Roger Federer and Murray, was the first singles final to be partially played under the roof, which was activated during the third set.

In 2012, the All England Club hosted the Summer Olympic Games and became the first Olympic grass court tournament since tennis was reintroduced as an Olympic sport and the first to be held at a Grand Slam venue in the Open era.

In April 2013, Wimbledon unveiled its ‘Master Plan’ a vision in which to improve the championships over the next 10–15 years. This was in large part due to other Grand Slam tournaments such as the French Open and Australian Open also announcing expansion and re-development plans.Aspects of the master plan included new player and media facilities, expansion of the No.1 court including a new retractable roof, new catering and hospitality areas, additional floor to the museum building, construction of an underground car park and new indoor courts and also a total reconfiguration of the site including the relocation of a number of practice, clay and championship courts.

New member and player facilities are currently being constructed by Willmott Dixon for completion in 2021.

Part of the plan also includes acquiring the land of the adjacent Wimbledon Park Golf club for £65 million, so that the tournament qualifying matches can be played on site.

On 19 October 2018, it was announced that a tie-break will be played if the score reaches 12–12 in the final set of any match; this will apply to all competitions including in qualifying, singles, and doubles. In a related statement, it was announced that starting at the 2019 Championships, quad wheelchair competitions would become a permanent event.

As a result of the COVID-19 global pandemic, the All England Club announced on 1 April 2020 that the entire grass-court season was to be cancelled as a public safety precaution, marking the first time a Wimbledon tournament would not be played since World War II and for the first time in the Open Era every major tennis event cancelled. Playing the tournament behind closed doors was ruled out as impractical, in part because at least 5,000 staff –including ballkids, officials, maintenance, and security– would have still needed to be on site to hold a functioning tournament. Former player and current All England Club board member Tim Henman told the Tennis Channel of the US that the board had carefully considered holding a closed-door Wimbledon. However, the sheer number of people who still would have needed to be on site led the board to realise “that wasn’t going to be a workable option”. Prior to the start of the 2003 tournament, the club began paying an annual insurance premium of £1.61m ($2 million) to cover losses from cancellation of Wimbledon in the event of a worldwide pandemic as a result of the SARS outbreak; it would receive an insurance payment of £114 million ($141 million) for the 2020 cancellation on expected losses of around £250 million ($312 million).

Photo by Alex Motoc on Unsplash