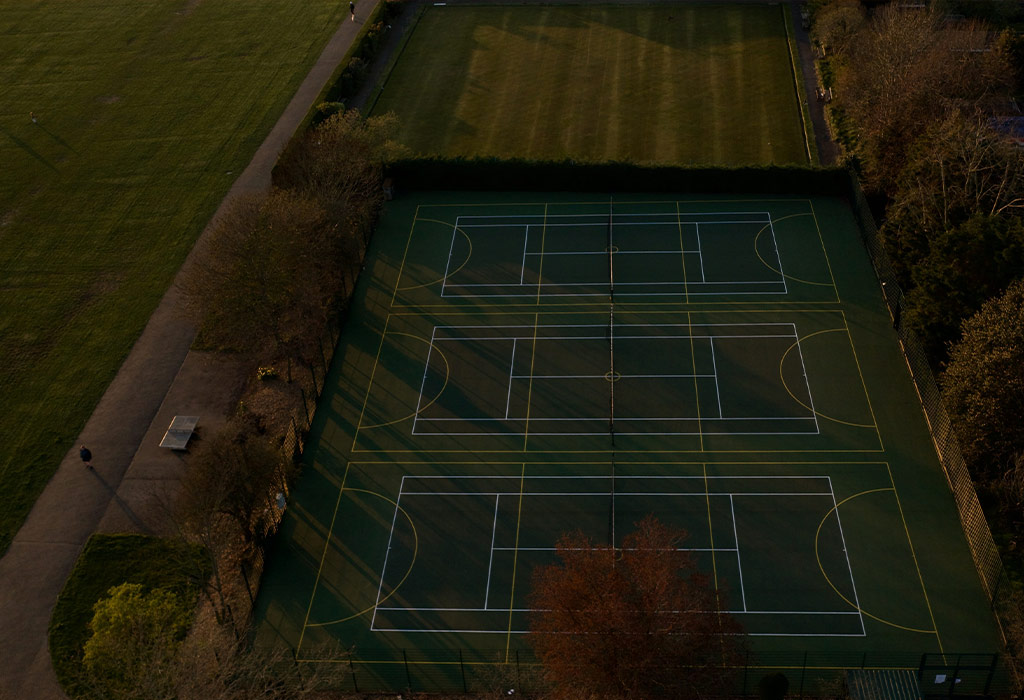 A grass court is one of the four different types of tennis court on which the sport of tennis, originally known as “lawn tennis”, is played. Grass courts are made of grasses in different compositions depending on the tournament.

Although grass courts are more traditional than other types of tennis courts, maintenance costs of grass courts are higher than those of hard courts and clay courts. Grass courts (in the absence of suitable covers) must be left for the day if rain appears, as the grass becomes very slippery when wet.

Grass courts are most common in the United Kingdom, although the Northeastern United States also has some private grass courts.

Because grass courts tend to be slippery, the ball often skids and bounces low while retaining most of its speed, rarely rising above knee height. In addition, there are often bad bounces. As a result, players must reach the ball faster relative to other surfaces, and rallies are likely to be comparatively brief; therefore, speed and power are rewarded on grass. On grass, the serve and return play a major part in determining the outcome of the point, increasing the importance of serving effectively, and maintaining focus in exchanges which can be heavily influenced by lapses in concentration. A grass court favours a serve and volley style of play.

Sampras is lauded by many tennis analysts as one of the greatest grass-court players of all time. He won seven Wimbledon singles titles in eight years from 1993 through 2000, with his only loss in that span coming in the 1996 quarterfinals. Roger Federer is statistically the most successful male grass court player of all time he has won an Open Era-record 19 grass court titles including an all-time record 10 Halle Open titles, an all-time record of 8 Wimbledon Gentleman singles titles, and one Stuttgart Open title. Federer has contested in an all-time record 12 Wimbledon singles finals. Federer has the longest grass court winning streak in the Open Era as he won 65 consecutive matches on grass from 2003 to 2008 where he was beaten by Rafael Nadal in the 2008 Wimbledon final.

The most successful female grass-court players currently playing are Serena Williams and her sister Venus Williams, with seven and five Wimbledon singles titles respectively. Venus has won five out of her nine Wimbledon finals appearances (losing three to her sister Serena) and achieving five titles in the ladies’ doubles with her sister.

Photo by Jay Mullings on Unsplash