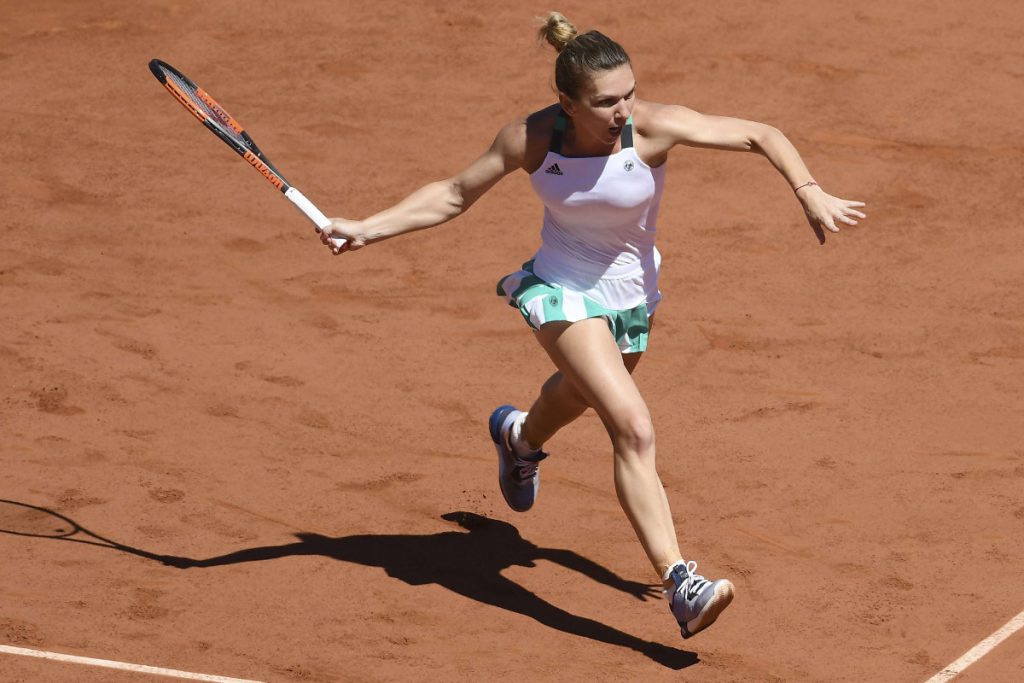 Simona Halep is hoping to finally win her first major this summer. (AP)

Simona Halep stood on the trophy presentation dais in the molten light of a gorgeous June afternoon at Stade Roland Garros in Paris. She had just lost the 2017 French Open final despite having led Jelena Ostapenko, a 20-year-old who had yet to win a WTA title, by a set and 3–0.

The runner-up, wearing a simple white pullover with green trim, was still trying to process her dispiriting collapse against a longshot underdog—Halep’s second loss in a French Open final. But wherever her mind was, it returned as she addressed the crowd.

“Well, bonjour everyone,” she said, composed to the point of appearing serene. She thanked the crowd for coming, paused, and confessed, “I’m sad.” A beat later she added, “I couldn’t win it.”

She thanked her team, led by her coach Darren Cahill, as well as her parents. Then came the painful part.

“I’ve been sick to my stomach for playing this final, so maybe I was not ready to win it. But hopefully I can play another final in the future, and win it.”

She paused one more time, then wistfully added, “It’s my dream.”

“Simona should have won, and she knew it,” says Carillo. “But admitting that she wasn’t ready to win during the trophy presentation? I thought, ‘Wow. What an admission.’

“I find her to be honest, more willing to reveal how she feels than most other players. And she’s like that all the time. It’s so admirable, and probably why she is so well-liked.”

WATCH—TC Live reacts to Simona Halep becoming world No. 1 in October of 2017:

It was Halep—not Serena Williams, nor Eugenie Bouchard, nor Maria Sharapova—who was the most clicked-on player on the WTA website for two consecutive years in 2014 and 2015. It earned her the WTA’s “Most Popular Player” prize each time. But being loved isn’t the most coveted prize for players. Winning a Grand Slam title is. And in that quest, Halep’s dream has proved elusive.

It’s easy to see why she has had trouble knocking down the door. Halep is just 5’6″, but with her sloped shoulders and light frame, she looks even smaller. The trim Romanian’s fighting weight is officially listed as 132 pounds. But judging by her results, most of that is heart—as she amply demonstrated, not for the first time, at this year’s Australian Open. In Melbourne, she lost a three-set title bout to Caroline Wozniacki, bringing her record in Grand Slam finals to 0–3. But the backstory to the final quashed any second-guessing of Halep’s combative zeal. She suffered a serious ankle sprain in her very first match at the tournament, then she rebounded from multiple match-point deficits against both Lauren Davis and former No. 1 Angelique Kerber.

Halep’s match with Davis will go down as a battle for the ages: a three-hour and 45-minute epic that equaled the Australian Open record for most games in a women’s match (48).

“She’s an incredible player,” said Davis, who lost the 15–13 third set. “She uses her speed to take time away and rush her opponent. She’s super agile and dynamic around the court.”

Not exactly the words you’d expect to hear about someone who had a damaged ankle, or a crisis in confidence. Halep’s heart will always go on.

Halep was born in Constanta, Romania, the oldest continuously inhabited city in the country and the largest port on the Black Sea. Tourists are drawn to the region’s mineral springs, but it’s unlikely that the rich waters have anything to do with Halep’s jackrabbit quickness or preternatural stamina. The former comes naturally, the latter is the product of her keen work ethic.

Those attributes enabled Halep to join the company of players who demonstrate that no matter how much the equipment, training regimens, court surfaces or the physical dimensions of the most successful players change, there’s always room in the game for the deft lightweight. And they are cherished.

Ironically, Halep’s principal shortcoming hasn’t been physical, or related to her size. It’s been mental. Despite her gung-ho spirit and unwavering work ethic, Halep hasn’t always been the uncomplicated, happy warrior. She’s waged a long struggle against a deeply rooted streak of negativity. It has sometimes caused her to give less than was expected, and has led some critics to write her off as unreliable—or, worse yet, a choker.

The label haunted Halep long after she secured a place among the game’s elite following her six-title breakout season of 2013. One of the most striking low points was her desultory, 6–1, 6–3 loss to Flavia Pennetta in the semifinals of the 2015 US Open. Halep was ranked No. 2 at the time, 21 places higher than Pennetta.

Carillo’s long relationships with some well-known Romanians, including Ion Tiriac and former French Open champion Virginia Ruzici (now Halep’s agent) taught her that negativity and fatalism are not uncommon among Halep’s countrymen. She broached the subject with Halep shortly after the player hired the easygoing Aussie Darren Cahill as her coach. Would his disposition and influence help Halep overcome her dark streak?

“I don’t think I will change,” Halep told her. Then, she added as if it were self-explanatory, “I am Romanian.”

Halep’s negativity was so pronounced that it almost cost her Cahill early last season. In a novel case of coach firing employer, Cahill walked out on Halep following her tepid performance against Johanna Konta in the quarterfinals of the Miami Open.

“It was like a shock, because I lost my coach,” Halep explained at a press conference. “But he never had something to complain about [when it came to] my game, or about the work. It was just my attitude. It was the one thing I had to change to have him back. So I worked hard, and I changed.”

Cahill returned to the fold in May in Madrid, and a motivated Halep promptly went on to win the title. She then reached finals in her next two events, Rome and Roland Garros.

Disappointing as the French Open was, Halep continued her consistently strong play for the rest of 2017. With a deep run in Beijing, she earned the No. 1 ranking in October, and went on to finish the season atop the WTA.

Seeded No. 1 at this year’s Australian Open, the 26-year-old acknowledged that she has made progress against her dark streak.

Naysayers argue that Halep’s ranking coup is a hollow honor, because she became No. 1 without winning a major. Tracy Austin, a former No. 1 and Grand Slam champion, forcefully disagrees.

“I think Simona’s run to No. 1 was tremendous,” says the Tennis Channel commentator. Austin explained that Karolina Pliskova and Garbine Muguruza both backed into the top ranking briefly last year due to losses by other players. Halep did it by winning critical matches in the very last days of the season.

“Simona earned it,” Austin says. “It was all in her hands, and she got it done under a lot of pressure.”

What, then, will it take for this much-loved and clearly talented player to win the French Open? Surely, she must continue to ward off those bleak moods. Her game needs no major re-tooling, just tweaks and additions, the stuff at which her well-traveled coach is an expert. Cahill has worked extensively on making Halep a more aggressive player, one less reliant on her wheels to get opponents into trouble and more reliant on her shots to put opponents on their heels.

Cahill has already helped Halep improve her serve, an area in which more could and probably will be done.

“I would love for Simona to get a reliable serve, not necessarily an acing serve, but something she could use to give her a one-two combination,” says Carillo. “If she had solid patterns to rely on, and was able to throw in a little more variety, she’d be very tough to beat between the lines.”

Given how well Halep covers the court, she could make greater use of the drop shot. She could also be more aggressive with the closest thing she has to a weapon—her backhand.

But when you examine Halep’s record, and how closely she played the 2014 French Open final (which she lost to Maria Sharapova, 6–4 in the third) and this year’s Australian Open final (which she also lost 6–4 in the third), it’s clear that Halep has more than enough game to win a major. It’s not about what happens between the lines, but between her ears.

“I give her credit, [she’s had] all the sorts of kicks in the stomach [but] she’s been able to keep coming out and keep putting herself in positions to win and keep doing what she has done,” Cahill told the New York Times late last year. “It shows she has a rem-arkable strength inside. She’s much stronger than she believes she is.”

All she needs to do now, in Paris, is show the world.