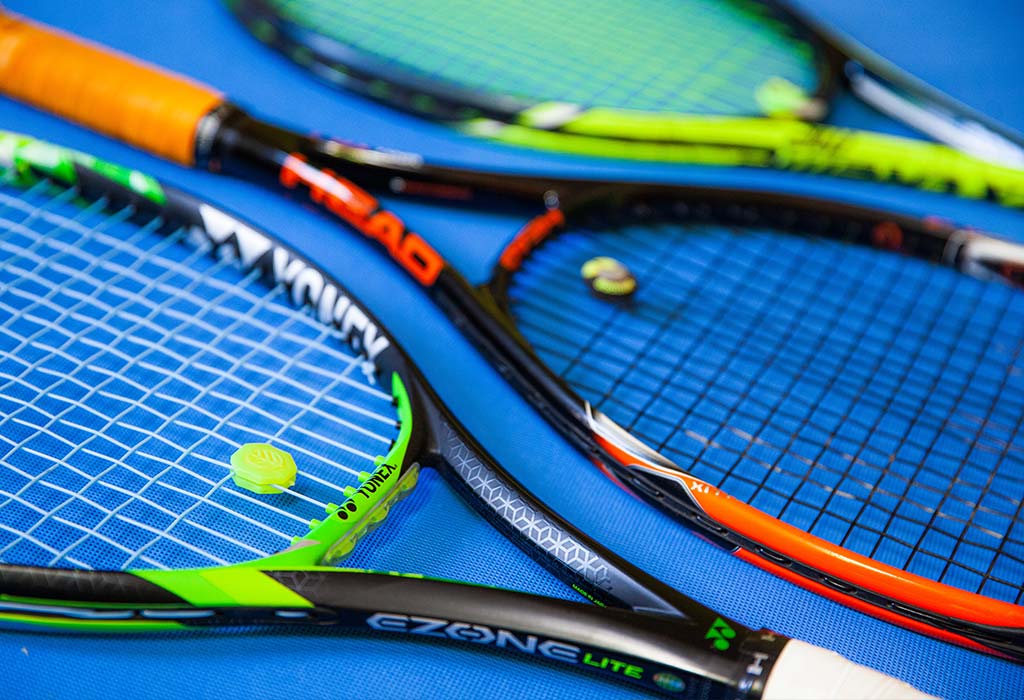 In tennis, the strings are the part of a tennis racquet which make contact with the ball. The strings form a woven network inside the head (or “hoop”) of the racquet. Strings have been made with a variety of materials and possess varying properties that have been measured, such as dynamic stiffness, tension retention, thickness (gauge), string texture (shape of the string), and rebound efficiency.

Virtually all modern racquets are strung in a criss-cross horizontal-vertical pattern. Various other patterns have been used in history with varying success.

Double strung tennis racquets were introduced in 1977 but the “spaghetti racquets” were later banned because they permitted excessive spin and were too successful. However, a modern version of the double strung racquet has been introduced that is legal to use.

Racquets are strung either with two separate strings (and thus four knots), or with a single string (resulting in only two knots). Sometimes, a hybrid of two different string types may be used in the same racquet. Traditionally, a double half hitch has been used to tie off tennis string, along with a starting knot. Recently, new kinds of knots have been used called the “pro-knot” and “Parnell knot”. Along with the use of a starting clamp, this can make all the knots identical, and improve the aesthetics of a string job.

The “string tension” of a racquet, usually expressed in pounds, indicates the pressure under which the strings are secured to the frame. The string tension affects a racquet’s playing characteristics, such as the “feel” of the ball, control over the ball, as well as maximizing power.

All racquets come with recommended string tensions, most of which lie between 50 and 70 pounds (220 to 310 N).

A loosely strung racquet will usually have a larger sweet spot and will hit farther but, when swung hard enough, it will shoot balls unpredictably; a tighter string job will help make delicate shots with more finesse and control.

An extremely tightly strung racquet cuts down on a tennis player’s feel on the ball, but can give the player excellent control if swung hard enough, with a smooth stroke. Such tension may make delicate shots more difficult, but makes play from the baseline more constant. However, if a player often hits powerful shots, a tightly strung racquet may quickly tire the arm, possibly resulting in tennis elbow.

Many professional stringers advise players to string racquets with the lowest tension possible while still being able to maintain control of the ball. Beginning players trying to find their tension should start in the middle of the recommended tension range and adjust the tension from there to meet their needs. The recommended tension is usually printed on the racquet. With a lower tension the racquet will have more power and less control; with a higher tension, it will have less power and more control.

Due to the tension present on the strings, elasticity and tension begins to decrease the moment they are installed in a racquet. “Dead strings”, or strings which have lost their tension, cut down on the performance of a racquet. Dead strings may also hamper a tennis player’s ability to generate power and pace, and may even make their arm sore.

The frequency of restringing depends on the player and the racquet, but there are a few recommended intervals. One is to restring the racquet as many times in a year as the player uses it in a week; e.g., if the racquet is used three times per week, it should be restrung three times per year. Another guideline is to restring after every 40 hours of play; if the racquet is used three times per week and three hours per session, it should be restrung approximately every five weeks. If the player has access to a tennis string tension meter (or access to a pro shop equipped with one), he may restring his racquet after he measures a loss of 25% or more of stringbed stiffness. However, many players who hit the ball hard enough to break the strings simply restring rackets whenever the strings break.

Photo by Alicja Gancarz on Unsplash