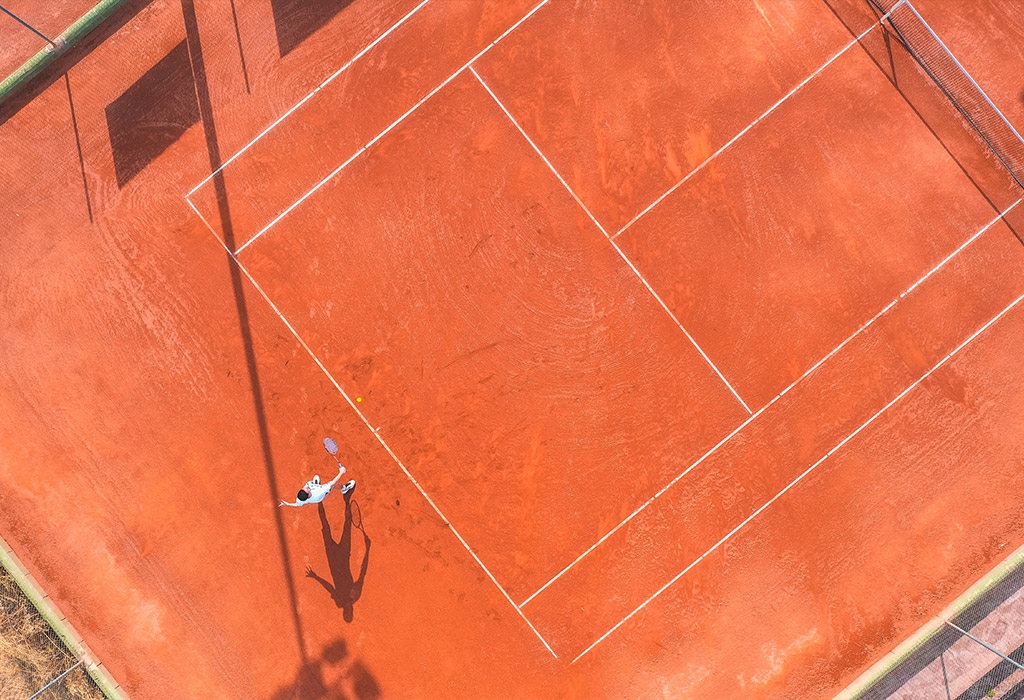 The topspin backhand can be effectively hit with the one handed backhand. To be able to execute a heavy one-handed topspin backhand, use the Western grip. In case you are not comfortable with this grip, you can also use the full or modified Eastern backhand grips. The full and the modified eastern backhand grips are the most popular grips used my many players to create topspin in their backhand shots. The continental grip is the least used grip because your hand will be in a weaker position to support your racket handle when your hit the topspin shot.

The topspin backhand shot ready position begins with the initial split step when your body faces the net. Then hold and support your racket (at the throat) with your non-dominant hand. Stand with your knees slightly bent and your upper body slightly bent forward.

Start your topspin backhand backswing by stepping forward to facilitate your forward motion and initiate the upwards push from the legs as you start your racket swing. Always focus your eyes to the ball. Then bring back your racket at your waist level with your non dominant hand still supporting it.

The one-handed topspin backhand generates its power from the linear forward and upward motion of your legs, body and your arm. Your racket position should be lower than the incoming ball. This is the most important aspect to consider in creating enough topspin in your one handed backhand shot.

If you are using the full or the modified Eastern backhand grip, you should meet the ball in front of your body to create enough topspin. To get the best results, the racket face should be parallel to the ground during contact, with your body in a sideways position and your eyes glued to the point of contact.

A split second after contact, the racket should move upward by 1 foot indicating the brushing effect of your racket face into the ball. The back foot should come forward. If you’ve been playing tennis for quite some time, this back foot sliding motion comes naturally. However, if you are a beginner, you should slide your foot intentionally to get use to it.

The start of the follow through is when you lift your shoulder. The leg should straighten due to the upward movement and your back foot sliding forward. At the end of your stroke, your body should face towards the net.

The grips for the two handed topspin backhand can vary, but the most common grip is with the Continental on your top or right hand (if you are right handed player) and the Eastern grip continental grip on your bottom or left hand. These grips allow you to produce topspin in your two handed backhand shot.

It’s important to assume a ready position while holding your racket as described above and point it towards the left net post. The feet should also point towards the net. As you anticipate a two handed backhand shot on your side, pivot your shoulder so that your shoulder is roughly perpendicular to the net and prepare to your movement towards the ball.

Many professional players with great topspin backhands employ the loop backswing style. This type of backswing also creates topspin in your shot. A loop is a circular movement that starts with your racket head by forming a C shape as you swing your racket. Professional players have different techniques on how they execute this loop motion.

The loop starts with the bottom of your racket handle facing the ground then it ends as your swing forward with your racket bottom end pointing to the sky. This motion allows you to create power and spin on your topspin backhand shot.

To execute a full compact backswing, your racket head tip should point towards the back fence. At the point farthest back on your backswing, the tip of the racquet should point at the back fence. Then step forward with your inside foot or left foot into the court (if you are standing on the baseline). The spread between your legs should be a bit wider than shoulder-width apart. This will allow you to have a comfortable weight transfer (from your back foot to you front foot) as your swing forwards and hit the ball.

After executing your full backswing, start to swing your racket forward in preparation to hit the ball. One very important aspect to look into at this stage is your racket position in relation to the ball. See to it that your racket position is roughly 1 foot below the ball for you to be able to brush up the ball with your racket head and create topspin. The power you exert on your forward movement determines the amount of power you create on your topspin backhand shot. At this stage, your body weight should also be concentrated on your front or right leg to facilitate the forward motion.

If your opponent’s ball is low, a split second before you hit the ball, see to it that your racket head should be lower than the ball. This is very important if you want to create enough topspin on your shot. Ideally, the vertical distance between the ball and your racket should be eight inches. Again this will allow you to create topspin in your shot as your brush up the ball at contact. Then as your initiate the contact and as you are about to hit the ball, you have to move your racket in such a way that its long axis is positioned horizontally with the ground as you hit the ball.

In case of a low ball, hit the ball just a few inches in front of your knee (right if you are right handed player). If the ball is higher, you should hit the ball a bit farther wherever you are comfortable with. Do not forget to lock your eyes unto the ball.

In case of a higher ball, you don’t need to drop down your racket too low but the racket head should still be position lower than the ball. If you drop your racket head too much, your shot might be airborne. Just lower it enough for you to be able to produce enough topspin. Ideally, position your racket head at about eight inches below the ball.

Your follow through should start with your racket moving forward with the racket face end point pointing towards the net. Your racket should also has risen from the lowest point it dropped (before contact) at about 3 feet. To accomplish this means that you created enough topspin and power on your topspin backhand shot.

The two handed topspin backhand stroke should finish with your racket farther over your shoulder. Professional players normally have a different follow through in this tennis shot with their racket more in front which signifies a more powerful shot.

Photo by Carles Rabada on Unsplash